Why Are Indexed Annuities Allowed to Market in Misleading Ways

“The ups of the market without the downs.”

“Don’t lose money when the market goes down.”

These are just a few of the claims you’ll hear when being sold an equity-indexed annuity. I’ve actually heard much worse. But why is a savings product with no exposure to the stock market allowed to be advertised to consumers as if it is similar to investing in the stock market, but somehow with less risk?

I recently read a tweet, which I can't seem to find, but it perfectly sums up indexed annuities:

“It’s like someone telling you that you can eat the desert and there are no calories.”

This is a good metaphor for an oversold product, and also a Seinfeld episode (“The Non-Fat Yogurt episode).

The Securities and Exchange Commission (SEC) and Financial Industry Regulation Authority, Inc. (FINRA) have pretty stringent guidelines when it comes to advertising of financial products (though some would argue not stringent enough), yet insurance companies, agents and marketing organizations that sell indexed annuities routinely mislead consumers about what they are placing their money in.

The National Association of Insurance Commissioners (NAIC) continues to allow the practice of blatantly misleading sales presentations and advertising by companies selling indexed annuities. Indexed annuities suffer from a lack of real regulation at the sales level, it’s a case of the fox watching the hen house. My experience is that the information asymmetry isn’t just between the agent and customer, it exists between the state insurance regulators and the insurance companies themselves.

They are called “indexed” annuities because the interest that is credited to the annuitant is based on how a specific (usually stock index) performs. The product sounds like it’s invested in stocks, but it’s not. The insurance companies typically invest a small portion of the premium paid by the annuitant into options or futures contracts to gain exposure to a particular index. The majority of the annuitant’s money is invested in relatively safe bonds which when compounded over the life of the contract will provide at least a minimum account value even if the money invested in options turns out to be worthless. Let me repeat, the annuitant's money is never at risk (stock market risk that is, there is always the credit risk of the insurer) and never exposed to the ups and downs of the stock market. Yet, I challenge you to find marketing material that doesn’t compare the path of an indexed annuity to that of the stock market.

In the graphic below, AIG is advertising their “Power Select Builder” indexed annuity product and is illustrating it against the S & P 500. This should not be legal. The representation is not just inaccurate, in my opinion, it’s fraudulent. Yet, this type of advertising is commonplace in the marketing of these product types. The only accurate comparisons would be other fixed annuities with similar ratings and perhaps bond funds (I get in trouble when I say CDs, but in my opinion, it’s undoubtedly a worthy benchmark as indexed annuities must return a higher percentage than CDs to be a viable alternative and because they have a similar investor base).

My point is that the comparisons should be to savings options with similar risk characteristics. 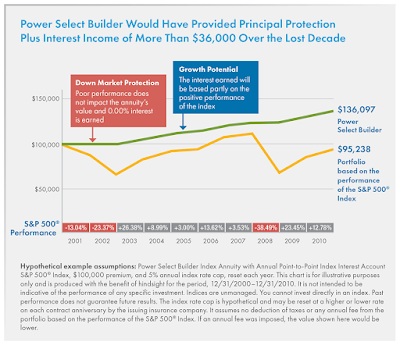 A close look at the above advertisement reveals several items that should never be allowed by competent regulators.

1. It compares a fixed annuity to the stock market

This shouldn’t be allowed. Full stop. The stock market has very different risk characteristics and can lose money if it goes down, it’s an investment, not a savings account.

2. It cherry picks the time-period

3. The product wasn’t in existence for the time-period presented

This is egregious. The product didn’t exist during this time period and thus shouldn’t be allowed to be illustrated. The assumptions used bear no resemblance to how the company would have likely credited interest. It’s blatantly misleading.

4. It illustrates with the same cap rate each year even though the cap rate would be different each year based on market events of the time.

5. No mention of surrender charges which reduces the value immediately below the initial investment if the annuitant wants the money back sooner.

You lose money day one in an indexed annuity because you lose liquidity. You can not pull 100% of your money out of the product the day after you make your deposit. So, yes, you can lose money in an indexed annuity, this is not clear. Your principal is not protected in the first several years of the contract due to surrender charges that must be paid to compensate the company for paying out a commission to the agent selling the product.

6. The chart compares annuity to the S & P 500 index without dividends either paid out or reinvested.

With dividends reinvested the index ending value would have grown to $115,256, not the $95,238 illustrated above. While this is important, it should be noted that this annuity should never be shown next to a stock index. This is a blatant misrepresentation and in my opinion flat out fraud. Insurance companies want the illusion that you can beat the index, but then misrepresent how the index performed over particular time-periods. The two shouldn’t be compared to each other at all, but if they are, the index return should include dividends. Not including dividends is deceitful (and purposeful). Any firm that advertises in this manner is not worthy of your dollars.

7. AIG has no idea how their product would have performed over this decade as it wasn’t in existence.

As mentioned earlier, this product wasn’t in existence during this full period above, so there is no real way to know what decisions AIG would have made each year at renewal. Also, you might recall that AIG nearly took down the global economy in 2008, something conveniently left out of the marketing. AIG could have made a more reasonable comparison by using their current plan for how they will credit interest based on the price of options and the level of interest rates, but even then, this would be highly misleading as we don’t know how executives would use profitability pressures to manipulate crediting rates.

8. There is no comparison to a bond index.

If one had solely invested in an intermediate term treasury bond fund, they would have ended up with over $180,000 assuming reinvested dividends. The bond fund lost money in only one year (not till 2009) and the balance never fell below the initial investment and had full liquidity at all points along the way. The first three years saw the bond fund return 6.07%, 7.55% and 14.15%, years in which the annuity would have credited either 0% or a maximum of 5%. The worst calendar year return for the bond fund was -1.69%.

My analysis in number 8 is using a default-free Treasury bond index, one would be within their rights to compare to a corporate bond index instead which might have credited higher rates. Regardless, an investment that took less risk performed significantly better and with more liquidity than the indexed annuity. This is not to say that an intermediate treasury bond index will always beat an indexed annuity, it’s just a more apples to apples comparison.

This advertisement is so misleading, it feels fraudulent. Don’t believe me, just read the small print:

“This chart is for illustrative purposes only and is produced with the benefit of hindsight for the period, 12/31/2000 - 12/31/2010. It is not intended to be indicative of the performance of any specific investment.”

How is an insurance company that shows a chart with the name of their annuity and that annuity beating the S & P 500 NOT intended to be indicative of how that annuity will perform in the future? What exactly is the point of the illustration then? AIG is clearly intending (by cherry-picking data sets and leaving out dividends) to show that their product could perform better than the S & P 500. To believe otherwise is intellectually dishonest. Also, why are they using a period of time that ended eight years ago? This chart is on their website right now, in 2019.

AIG discloses that the “index cap rate is hypothetical,” so where did the 5% cap rate come from? It's anyones guess. AIG has a lot of resources, and they know how they intend to credit interest in this product. They could have taken their current pricing model and applied it to this time-period (they would have looked at historical option prices and interest rates) to determine what their cap rate might have been each year. Instead, they apparently made up a number that makes them look good even though it may have little basis in reality.

Imagine if a mutual fund company advertised how they might have performed during the most tumultuous periods the stock market has gone through in modern history, it wouldn’t be allowed. You can’t advertise back-tested, hypothetical returns. Why is AIG allowed to make such false comparisons and misleading claims? I can only imagine it’s because there is not a strong enough regulator. It’s not really AIGs fault, they are just following the industry leaders and taking advantage of the lack of regulators doing their job. I take that back, they could have chosen to be a leader and not advertised like the rest of indexed-annuity industry, but that would have required morals and guts.

Insurance companies want to be governed by weak state insurance commissions instead of a robust national regulator, they love the current status quo. Regulators should be ashamed of what they’ve allowed to occur in the indexed annuity product market, they need to correct the abuses. The pendulum has swung too far, insurance companies have taken advantage, and consumers are paying the price.

I was watching a webinar put on my IAMS (an insurance marketing organization) the other day and was shocked when I heard the representative talk about a new “inverse index” crediting method. He intimated that if you foresee a downturn in the market, you could move your client to the "inverse index" and end up getting interest credited during the downturn. Of course, this assumes that you are correct about the decline happening, an unlikely scenario. Besides, isn’t the indexed annuity supposed to already protect you from downturns? How is any of this marketing legal?

The current state of indexed annuity marketing is, in my opinion, misleading at best and fraudulent at worst, but it’s perfectly legal. Regulators have completely abdicated their responsibility to the public. It’s time for insurance to be regulated at the federal level or at a minimum that indexed annuities become subject to SEC regulation. Also, insurance agents should be required to be a fiduciary in all transactions involving these products (mind you, I haven’t even gotten into the incentives offered to entice agents to sell these products, which should also be illegal).

I invite you to submit your own examples of misleading indexed annuity marketing.
Are you 403(b) Wise? 403bwise.org is the place on the internet to learn, advocate and build community.
Posted by Scott Dauenhauer at Friday, September 06, 2019