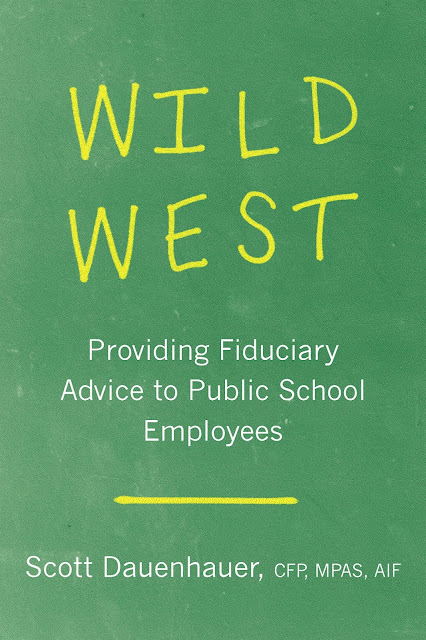 It's taken me almost four years, but I'm almost there!

I'm in the formatting and distribution phase of my new book and anticipate it will be released in January 2016.

Wild West: Providing Fiduciary Advice to Public School Employees is written for financial advisors who consider themselves Fiduciaries and who want to learn how to work with those in education.

I'll post a chapter or two over the next 6 weeks as a preview. But look for it on Amazon, iTunes and Google Play in January.

Senator Elizabeth Warren began an investigation of insurance company non-cash compensation methods several months ago, what she found will be shocking to most people, but not to those of us who've been following the unethical sales practices of the annuity industry for decades.

Titled Villas, Castles, and Vacations: How Perks and Giveaways Create Conflicts of Interest in the Annuity Industry, the document outlines some of the incredible perks that insurance agents receive in addition to commissions when they sell annuity products. Warren hinted at some of these perks in a Senate Banking Committee back in April, you can watch her below:


In this report Warren attempts to discover the entirety of non-cash compensation, though she isn't entirely successful, here's an excerpt:


"Kickbacks pose an especially dangerous problem. When companies can offer kickbacks to agents for recommending high-cost financial products, and when those kickbacks are hidden from the customers, the likelihood that consumers will be duped into buying bad products increases sharply.

To explore the prevalence of this type of conflict of interest, in April 2015 Sen. Elizabeth Warren (D-MA) opened an investigation, asking fifteen leading annuity providers for information on whether they offered non-cash incentives such as lavish cruises, luxury car leases, and other perks to annuity sales agents to promote their products and whether their customers were aware of the agents’ compensation arrangements."

Reading this report one wonders how the insurance industry continues to get away with such unethical and clearly conflicted business practices, it's a testament to the power of that industry and Warren is confronting them head on.

Dan Otter of 403bwise.com and I recently did a podcast on such compensation practices and you should be able to listen to it soon by going to www.teachandretirerich.com and clicking the podcast link.

I encourage you to watch the above video and then dive into Warren's report.

It's time to put a stop to these unethical compensation practices.


A Superintendent in the Longview Independent School District in Longview, Texas is in hot water for using his position to promote Primerica financial products to his employees. The Longview News-Journal published Longview ISD' Superintendent's Business Banned in which it says the following:

Since taking the top job in Longview ISD, Superintendent James Wilcox has had a side business selling what he calls retirement planning to educators. As of this week, however, he and his representatives won't be peddling their products on Longview ISD campuses.


After representatives from Primerica — a company some say is essentially a pyramid scheme — made their pitch Oct. 22 at Longview High School, the district's school board directed Wilcox to "not allow any meetings of this type on any LISD property in that future," Wilcox said last week.


"That will be fully complied with in the future," he said.


A portion of the district's employee policy manual seems to prohibit such an on-campus sales pitch, but Longview ISD board President Chris Mack said last week he didn't see anything wrong with the company's services being sold on district property. The manual, however, prohibits employees from using their position with the district "to attempt to sell products or services."


The board made its decision, Mack said, not because of its policy but after hearing an uproar from the community.


"We got a lot of complaints, but there was no pressure there. But because of the fallout, we felt like it would be better if we didn't allow it anymore. It's a shame that we had to say that because there was a lot of potential there."

Wilcox isn't the first person or educator for that matter to fall for the siren's call of Primerica. Who wouldn't want to earn an extra income while helping our nation's educators? Yet Primerica is NOT a financial planning company, it's a product sales company and is focused first on selling those financial products as well as recruiting others to sell their products, a multi-level marketing type business.

The issue here really isn't Primerica or Wilcox, it's the sorry state of the 403(b) market where things like this occur on a regular basis. The wild west of defined contribution world needs dramatic change if it's going to become an important part of educator's savings plans.