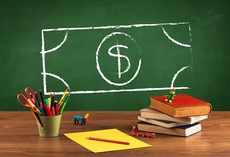 There have been over 900 comments on the recent New York Times article "Think Your Retirement Plan is Bad? Talk To A Teacher" and I've been making my way through them, slowly. There are many good comments, but some are downright idiotic.

The comment I want to focus on in this post is not so much idiotic as ignorant.

I find it really hard to be sympathetic towards a group of people who are eligible for pensions. This is a great article in terms of exposing abuses in the 403bs, but please don't ask me to feel sorry for teachers. Almost no one other than government employees get pensions these days. Teachers are sitting pretty, 403b abuse or no.


I can't tell you how often I see this argument. Teachers have a pension, I don't, therefore I don't care or feel sorry if they are mistreated, this is a bullshit way of thinking.

Wikipedia defines a pension as follows:

A pension is a fund into which a sum of money is added during an employee's employment years, and from which payments are drawn to support the person's retirement from work in the form of periodic payments.

Let's step aside from the Social Security comparison for a moment and focus on the idea that because someone has a pension that it's somehow ok for them to be financially abused. This is an absurd notion. Teachers are not "sitting pretty". Sure, some are, but shouldn't that be our goal? Shouldn't we WANT the best for our teachers so that we can attract and retain the best and then reward them for doing a job that is incredibly important? But explain to me how it makes it ok that teachers are taken advantage because they might have a pension that may be more generous than yours? This is just spite. EVERYONE deserves the opportunity to save money in a manner that is low-cost and fiduciary in nature and most Americans are under a system that promotes such ideals (though much of the time they are not lived up to and way to many Americans are not covered by a plan at all), but teachers are NOT under such a system, their plans are specifically excluded from the same consumer protections that most Americans have.

I'm tired of this ridiculous notion that teachers deserve what they get because they have access to a pension, it's not only ignorant, it's cynical and I'm not going to sit back and listen to it anymore without a response.

Scott Dauenhauer, CFP, MPAS, AIF
Are you 403(b) Wise? 403bwise.org is the place on the internet to learn, advocate and build community.
Posted by Scott Dauenhauer at Friday, September 06, 2019